A character you want next series


this one has really thrown me for a loop. i'm assuming (for a basic assumption of trollage) that the regular group will be back, plus one surprise that no one is sure how they're going to do or, indeed, if it's just the trolls being trolls, but that also means they'll be doing new stories. so i started thinking about it and decided there was one character who puts in a lot of work in one of the fairly main stories and it would be fun to have him make an appearance in the show. 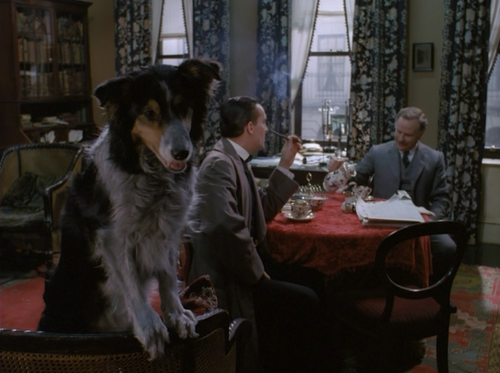 Toby!! *grins* seriously, wouldn't it be fun to have him in an episode? he appears in "The Sign of Four" in the cannon, which is the story where Watson meets his wife Mary. there's some debate as to whether she is the first wife or the second, but they do end up married. then there's some debate about how many times he's married after Mary dies. *sighs* anyway, i just think it would be fun to have some "old school" detecting and use a dog for the case. and Toby is pretty cute on TV, even if he wasn't in the cannon. (yes, that is Jeremy and Edward in the background. Granada is the only one i know who has done this story with a dog)
Collapse